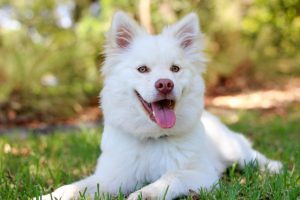 Out of all the common summer pests – ants, fruit flies, mosquitoes – ticks are the most dreaded and loathed. It’s not surprising, either. Ticks found in North Carolina are prone to carrying disease, and their bites alone can cause dangerous reactions and infection. The fear of ticks is enough to want to keep your family and pets indoors all summer, but since that’s not always practical or enjoyable, our Raleigh pest control company has created a handy survival guide so you know what to look for and how to prevent ticks and tick bites.

Ticks are arachnids, meaning they’re related to spiders, and if you look at one, you’ll see they actually closely resemble spiders with 8 legs, a wide body, and no antennae. North Carolina is home to multiple varieties of ticks, and they are found living in tall grasses, bushes and shrubs, wooded areas, and leaf litter.  As raccoons, dogs, or humans brush past where they’re sitting, they’ll climb on and attempt to attach to the “host” through biting. 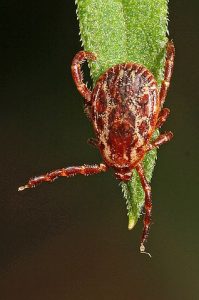 The American dog tick is found throughout North Carolina and is especially prevalent in Wake County and surrounding areas. It has a brownish-red, wide oval-shaped body and is active from spring through the fall where it lives in nearly all habitats where there’s tall grass, wooded areas, and even shrubs and bushes. While this species does not carry Lyme disease, it is a carrier for Rocky Mountain spotted fever and is prone to biting both humans and dogs.

The brown dog tick can be active all year because it lays eggs in cracks and gaps in kennels and homes. It looks very similar to the American dog tick, and while they rarely attach to humans, they feed on dogs and breed quickly, meaning they can quickly infest a kennel or place where multiple dogs live. 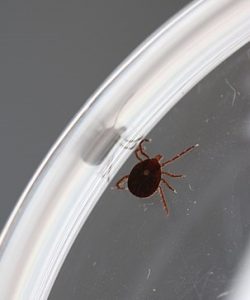 The lone star tick is found in the spring and summer in Raleigh, living in the same habitats as the American dog tick – tall grass, bushes and shrubs, and wooded areas, though it’s not as prevalent. It seeks out humans and dogs as hosts and is identified by the star-shaped white dot on its round back.  While this tick does not carry Lyme, bites can cause severe reactions, including Southern Tick Associated Rash Infection that mimics Lyme disease and can trigger the “alpha-gal allergy.” 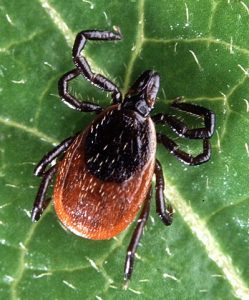 The black-legged tick, also known as the deer tick, has an oval-shaped, brownish-red body and black legs. It is active in the cooler months, in fall and early spring, and though it’s not widely seen in Wake County and is more often found in the coastal plain it’s not uncommon around the area. Because it’s the main carrier of Lyme disease, it’s important to take this threat seriously.

Diseases and Illness Caused by Ticks in North Carolina

The biggest fear of ticks is due to the dangerous diseases they carry.

Unlike the name suggests, this disease is found in ticks throughout the U.S. and is the most common tick-borne illness in North Carolina. Carried by the American dog tick, symptoms appear within 2 to 14 days and include flu-like symptoms and a rash beginning on the wrists and ankles. Rocky Mountain spotted fever can be fatal if untreated.

While it’s the most well-known tick-borne disease, it’s actually very rare in North Carolina and only carried by the black-legged tick (deer tick). Early symptoms include a “bull’s-eye” rash pattern around the site of the tick bite and may be accompanied by flu-like symptoms and muscle pain and stiffness. If left untreated, inflammation of the brain and nerves can occur along with chronic arthritis and joint pain.

Carried by the lone star tick, ehrlichiosis is a dangerous bacterial infection. Symptoms appear within 14 days of a tick bite and include high fever, muscle aches, headache, and small percent experience a rash. If left untreated, the infection can lead to organ failure, seizures, and coma, though this is incredibly rare.

The alpha-gal allergy  is a reaction to a sugar molecule found in meat from mammals. A bite from a lone star tick can trigger a reaction in the body that leads to being allergic to alpha-gal. This means the affected person may develop an allergy to beef, chicken, lamb, and pork and experience severe reactions after eating meat, including rash, hives, difficulty breathing, and severe digestive reactions.

Avoiding and Preventing Ticks in Raleigh

While we included descriptions and images of ticks, you probably don’t want to get close enough to one to see if it’s got black legs or a spot on its back. We don’t blame you, so here are some tips for preventing getting bitten by a tick and reducing their presence in your yard and landscaping.

Protect Yourself and Your Family

At Stomp Pest Control, we want to help keep you and your family safe so you can enjoy the summer. Our mosquito preventive spray also does an amazing job at reducing the prevalence of ticks. Combining regular mosquito treatment with the recommendations above should give you the peace of mind to spend time outdoors and allow your kids and pets to play freely. To learn more, contact us today at (919) 231-3292 or fill out our contact form below.

We would love to hear from you! Please fill out this form and we will get back to you shortly.